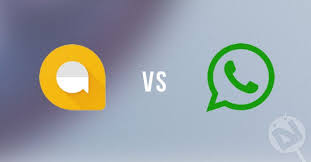 The search giant’s biggest play is Google Assistant which announced at the Google I/O. Assistant is included in Google Allo as a preview version. Unlike WhatsApp, you can search people, places, food joints, etc. inside your instant messaging app.
WhatsApp’s daddy Facebook is working to enable alerts for various purposes like flight timings and bank notifications. This intention was revealed when WhatsApp announced that they will besharing your contact number with Facebook.
The Assistant is directly aimed to compete with other virtual assistants like Siri and Cortana. But the Google Assistant has a lot to learn before it could challenge the biggies. Google has plans to put Google Assistant in place of Google Now in its Android OS.

You can message your friends who have a WhatsaApp account. But what if you want to contact someone who doesn’t have the WhatsApp installed on their device. You won’t be able to send the message. But you can do so in Google Allo. Your contacts who don’t have the Allo app installed can receive texts as SMS. And it will cost nothing to you or the recipient.

News has been floating around that Google will not be sticking to their earlier decision of not keeping user conversation details on its servers permanently. Earlier, Google said it would be beneficial to users’ privacy if the data is stored temporarily. With Allo coming into existence, it seems Google doesn’t care about the aforementioned privacy drama. Now, the company gives the reason that the conversation would be used to fuel their Smart Reply feature and make it more efficient and useful.
At least, Google Allo has the advantage of the “Incognito Mode”. Using incognito mode in Google Allo would disable Google from storing any of your messages on its servers, in fact, reading them at all. Also, the messages would disappear from the recipient’s device after the specified time limit.

Google Allo has got some amazing formatting features which you’ll love and one of them is Whisper/Shout. Press and hold the send button to change the size of the text and emoticons using the slider. The app also has some great emoticons and fresh sticker sets out of the box. On the other hand, WhatsApp also has some cool text formatting features which most people don’t know.

Google made Allo from scratch, not as a successor to the Hangouts. The messaging app has received appraisals for including the AI chatbot and the smart reply features. But it has also faced backlashes from whistleblowers like Edward Snowden who has been tweeting about the security concerns Allo can pose in front of the users. But some Twitteratis are asking Snowden why a normal user should care about data being stored in data centers.
It’s good that the Google Allo has some amazing features. But WhatsApp is more mature and has an experience of six years. Allo will have to prove itself to a large number of WhatsApp users who put up the question, Why should I leave WhatsApp?
If you have something to add, tell us in the comments below.
Share186Tweet117Share47

Buy a OnePlus 7, OnePlus 7 Pro smartphone and get OnePLUS voucher $20 off accessories

Google confirms Pixel IP53 rating, don’t get it too close to water