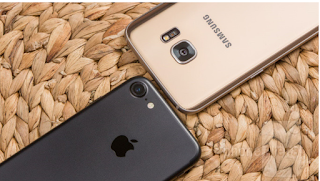 The iPhone has a faster than before camera with optical stabilization

Samsung in particular has made great strides in improving its design and its latest phones are an absolute delight in terms of visual style. Not only this: Samsung’s 12-megapixel camera is the fastest one around and many regard it as one of the best cameras on a smartphone. Apple, however, is not
eager to give away its leading positions without a fight: the iPhone 7 brings a faster-than-before, f/1.8 lens that captures more light for those hard to get shots after the sun sets. The iPhone 7 is also the first small iPhone to feature optical image stabilization (OIS) that helps for steadier shots, a feature that the Galaxy S7 Edge also has.

Knowing all this, it’s no surprise that we were extremely curious to see which one has the better camera. First, let’s start with a look at the camera specs, and continue with the more interesting stuff: the actual images. 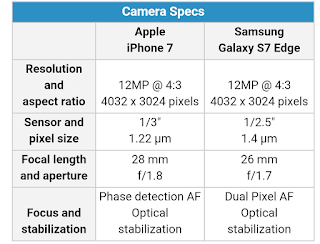 Note: All images below are downsized to 680 pixels wide for optimal viewing on the web. You can see the full-sized camera samples from the two phones here:

The first challenge that the two cameras faced was a dynamic outdoor scene. The bright blue sky with the occasional cloud contrasted with the comparatively dim building below. You can see that this posed quite the challenge for both phones and resulted in two vastly different images: the Samsung Galaxy S7 Edge with its wider lens metered more of the building and left it brighter, while burning the highlights in the sky. The iPhone, in comparison, preserved much more of the blue skies, but the building which is the main object in this photograph remained underexposed and on the dark side. If, like us, you were trying to photograph the building, you would likely be happier with the brighter picture from the Galaxy S7 Edge, as it shows the building with much more clarity. #2: The green grass after the rain

Fields of grass are a common background for photographs, and that’s why we were curious to see how the two cameras will capture the fresh off the rain grass in this little corner of town. It’s immediately obvious that the Galaxy S7 Edge has one peculiarity: it renders greens with a very prominent yellow tint, while the iPhone 7 captures green in its natural, slightly colder color tonality. Samsung’s aggressive oversharpening seems to work well here: the Galaxy S7 Edge image looks sharper and cryspier, while detail on the iPhone 7 is much softer. If you look at the full-sized image, it’s also noticeable that the detail is blurry on the iPhone picture. It seems that our hands was a bit shaky when taking that picture, but this was made worse by the inappropriately slow 1/50 shutter speed on the iPhone, while the Galaxy took a picture at the faster and more appropriate 1/100 of a second shutter speed. Overall, we tend to prefer the Galaxy S7 Edge image for the aforementioned reasons, but that’s a much closer call.

People and portraits are one of the most common things photographed on a phone, and in this night portrait, we left it all for the cameras to decide. We’ve got some vastly different results: the iPhone fired the flash, while the Galaxy S7 Edge did not think it was necessary to use the flash. This is an easy win for the Galaxy: it made the right choice by not using the flash and you have very pleasing colors on the face of Nick who poses for a portrait here. You can also see the ship behind him, which gives the picture a lot of character, as intended. The iPhone’s flash ruins this picture: it overexposes Nick’s face and hides the ship in the shadows, and it just does not capture the place and moment appropriately. Photographing against the sun is a tough task and often not recommended in the photography books, but breaking the rules sometimes help see how good a camera is. The iPhone seems to do a much better job here: it retains the blues of the sky that peeks at us behind the branches, and it does not get fooled by the bright sun. The Galaxy it paints the trees’ leafs an unnatural yellowish green and does not show the blue sky as our eyes can see it, and fails to capture the mood of the moment contained in the contrast between the blue sky and the grean leaves. If you are trying to capture a macro shot of a flower or some small insect that is moving, it is essential to have a fast-focusing camera. The Galaxy shines in this aspect: its Dual Pixel auto-focus is significantly faster to focus and is able to capture sharper images more often. For all else, it’s a close call between the iPhone and the Galaxy in terms of image quality. The iPhone does capture a darker image that feels just a bit under-exposed, but for all else detail and colors are excellent on both. #6: The bird house in the trees

The darker exposure of the iPhone proved to be a real problem while we tried to capture this cute bird house in the tree. We tried focusing explicitly on it, but still did not manage to get a proper exposure: it was all too dark and we’re not happy with the image on the iPhone. The Galaxy, on the other hand, had no such issues: it picked a more appropriate, brighter exposure and was able to show the bird house as we wanted to capture it. #7: The fish restaurant at night

This ship-turned-fish-restaurant was the last thing we photographed for this comparison. It’s easy to see that the wider lens on the Galaxy captures more of the picture, while the iPhone has a narrower field of view. This picture is also a good opportunity to once again see how images from the iPhone turn out darker by default. This gives the image some character: it’s a night picture after all and there is less light spill from the bright lamps on the ship. The Galaxy picture is also great, however, and it’s a matter of personal taste which one you like better here.
Share186Tweet117Share47