It’s rugged! Has Nougat! Doesn’t explode! LG’s V20 has a few legs up on Samsung 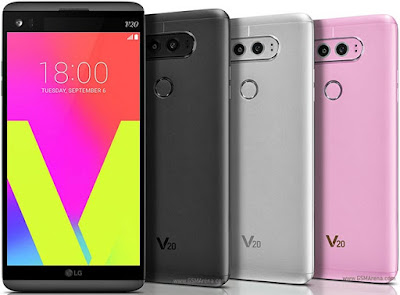 With Android Nougat, drop protection, and a superb camera, LG’s V20 already has us excited.

LG is having a tough time this year. Though the LG G5 introduced an innovative system of modules that could augment and transform it, most U.S. phone buyers flocked to Samsung’s shiny, curved Galaxy S7 and S7 Edge – or the iPhone. A week ago, I would have said that the new LG V20 would get swallowed up by Samsung’s Galaxy Note 7 … then they started exploding.
With the Note 7 on full recall around the world, LG’s latest Android phablet is looking mighty attractive out of the gate.
Like its V10 last year, the V20 is LG’s phone for the millions of us who want a big phone that can withstand our butter fingers. The V20 has a full military drop-test rating, some impressive cameras, and performance that rivals even its burliest competitors — and it’s a triumph of industrial design.
And now, it looks like you’ll be able to start pre-ordering the V20 on October 17. At least, that’s when B&H Photo says the phone will be available.

From beast to beauty 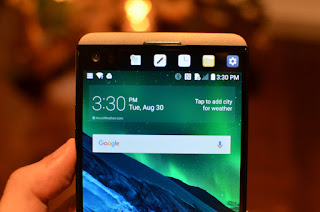 We really liked the LG V10 last year, but if it had one Achilles heel, it was its plasticky design. The heavy, grippy body let you know that it wasn’t going to break, but didn’t capture anyone’s eye. That and it was bulky, even by big-phone standards. 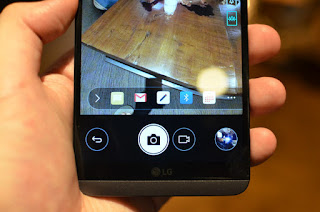 The V20 looks like a whole new phone. Instead of a black rubbery texture on the back, it has a clean-looking shell made of the same strong aluminum alloy used in airplane wings, mountain bikes, and sailboats; it also pops off, so you can easily replace the battery, Nano SIM card, or MicroSD card. Check out our video —  this feature is awesome. The top and bottom of the phone also feel like metal but are a Silicone Polycarbonate, a fancy phrase meaning “durable plastic.” LG claims its new plastic can absorb shocks 20 percent better than last year’s phone.
Though it would be nice if the phone were waterproof, too, it’s a relief to know it probably won’t break if we drop it. With the size of phones these days, many people seem to drop them daily.
Thanks to a reduced bezel, the V20 is very comfortable to hold, especially for a device with a massive 5.7-inch screen, and a bonus extra screen up top for notifications. The dual-function power button and fingerprint sensor on the back is in a comfortable position, and the volume rocker is on the left side.
It will come in silver, pink, and titan, which is more of a champagne color. Sadly, none of LG’s snap-on modules for the G5 work with this phone.

A Nougat of a surprise

The V20 is the first new phone to run Android 7.0 Nougat, the newest version of Android from Google. LG has modified the OS a little, but not as heavily as usual, which is a great thing because Android 7 is fantastic looking on its own and has several handy features, like multiple windows, expanded notifications, and more useful quick settings.
One of the best new additions is the little screen that acts as a horizontal ticker above the screen. It measures 2.1 inches diagonally, and has a much larger font size this year, so it’s easier to read. You can customize it, but the basic functions are adding hot contacts, reading notifications, opening select apps, and a few other things. It’s fun and useful, though hard to reach way up on top of the normal screen.

As powerful as Android phones get

The V20 is as powerful as phones come in late 2016. It matches Samsung’s best phones, along with anyone else’s. It will also likely match their high price tags, but that’s another story.
The V20 is LG’s phone for the millions of us who want a big phone that can withstand our butter fingers.
If you need the specifics: The V20 runs a Qualcomm Snapdragon 820 processor, has 4GB of RAM and 64GB of internal storage, with a MicroSD slot if you need more. Its 5.7-inch IPS Quantum Display is brighter than a normal LCD screen, covered in Gorilla Glass 4, and has a 2,560 × 1,440 pixel resolution.
Battery life should be good, with 3,200mAh on board, which is a little higher than you sometimes get on a phone this size. LG promises 20 percent better battery life than the V10, but that still means you’ll likely have to charge your phone every day and a half. Thankfully, it includes fast charging (thanks to USB Type-C), so it shouldn’t take too long to juice up. We haven’t used the phone long enough to get reliable readings on battery life, so check back when we can share more.

Like all LG phones for the past couple years, the camera is kickass, but it has a few new abilities. You get two cameras on the back of the phone: a 16-megapixel main lens with a super-fast F1.8 aperture and optical image stabilization, and a slightly weaker 8-megapixel wide-angle lens with an F2.4 aperture, for when you need to fit more in frame. We took a few shots using both views, and they came out amazing (at first glance). 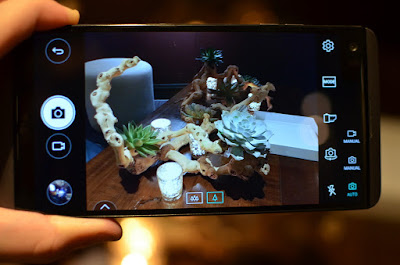 For you selfie-hounds, the 5-megapixel selfie camera on the V20 has a wide angle mode, too.
Autofocus didn’t appear any faster than previous LG phones, but it’s always been fast. The V20 uses a combination of laser, phase, and contrast autofocusing tech to help you focus in low light, indoor light, outdoor light, and even track moving objects. Demos showing it perfectly tracking a moving object were impressive and we look forward to trying it out.
Recording video should also be fairly smooth on the V20. A new Steady Record 2.0 feature leverages some tech on Qualcomm’s chipset and gyro sensors to reduce jitteriness while you’re walking in videos, or moving in other ways. In practice, we need to hit the streets to try it out when we get a full review unit.
LG is also proud of its new high-performance microphones, which should record high-resolution audio, even in loud areas (120-132dB). It can also save it in lossless formats, and thanks to four built-in DACs, it can now play them back much clearer as well, supposedly. We weren’t given any high-res audio samples or headphones to sample that aspect, but LG has pushed audio in its phones for a couple years now.

LG knows what it’s doing. The V20 will likely be one of our favorite phones for the fall, and we’re impressed that it includes the latest version of Android, especially since most phones are lucky to ever get the latest version of the OS (it’s a real problem).
With the Galaxy Note 7 tainted by a massive recall, the V20 looks like the phablet to beat this fall, despite its high price. Both T-Mobile and AT&T have announced pricing and availability of the device, with T-Mobile saying that the phone would launch on October 28 for $830, and AT&T opening pre-orders up on October 7 ahead of an October 28 launch. It will be available for $830 unlocked, however you’ll also be able to get the device for $27.67 per month for 30 months or $34.59 per month for 24 months.
Share186Tweet117Share47