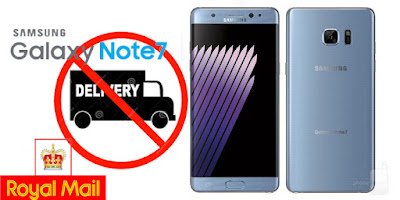 If you want to ship a parcel in the UK, there’s several carriers you can use – most are international names such as DHL, FedEx, ParcelForce and DPD – but we also have Royal Mail, which is the
equivalent of the United States Postal Service (USPS). Most customers will simply post to their local Post Office and ship something using Royal Mail but if you want to ship your Galaxy Note 7, you’ll be in trouble.
Thanks to a tip, we’ve been able to establish that there is a directive in place requiring the Post Office to ask about the contents of every package and to refuse any parcel containing a Galaxy Note 7. However, some Post Offices are taking this a step further and refusing to accept packages containing any Samsung phone, although this is not an official decision; earlier today, we managed to confirm with six Post Offices that they couldn’t carry the Galaxy Note 7 and of these, two said they wouldn’t accept any Samsung Galaxy phone.
For Samsung, this presents an interesting problem as the Galaxy Note 7 doesn’t stand a chance of successfully reclaiming its throne as the king of flagships if consumers continue to be reminded of the handset’s woes. Like the airlines, it remains to be seen how quickly companies remove these limitations on the Galaxy Note 7, if at all.
We’ve also heard that other couriers are refusing to carry the Galaxy Note 7 as well, although this isn’t confirmed as yet. We’ve reached out to the major couriers in the UK and the US, and will update as we hear more. Have you been asked about the Galaxy Note 7 when attempting to post a package? Do you think Samsung can move past these troubles? Let us know in the comments below!
Share186Tweet117Share47