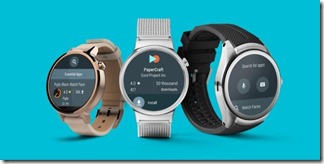 For the folks out there who want to use their Android Wear smartwatch to pay for things instead of having to pull out their phone, that feature may be arriving soon.

According to information discovered by Android Police, Google is testing the feature in late stages right now. Strings pertaining to user interface tweaks which would support using Android Pay on an Android Wear-based wearable have been discovered in the Google Play Services v10.0 APK. It shows that Google is prepping Android Pay support for Android Wear, so that owners can simply hold their smartwatch over a payment terminal.

The arrival of the feature has been a long time coming, to be sure, especially considering Samsung and Apple already have support for mobile payments on a smartwatch. It’s likely that mobile payments will be a standout feature for Android Wear 2.0 when it launches early next year.

However, you may need a new smartwatch to take advantage of the feature since that not many current Android Wear smartwatches support NFC. The ASUS ZenWatch devices include NFC, but popular models like ones from Motorola and Huawei and others will need to be updated with NFC if potential buyers want to use the device for mobile payments.

Are you looking forward to Android Pay support on Android Wear?