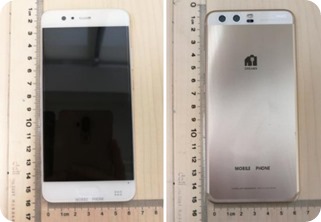 Last year’s Huawei P9 was the result of a successful collaboration between Huawei and Leica. The smartphone placed a particular focus on the camera, featuring a full-color sensor paired with a black-and-white sensor for vibrant, detailed photos. The company is expected to launch a successor, the Huawei P10, and the first renders of the device have been published by 91mobiles and OnLeaks.

The Huawei P10 will have a 5.2-inch display and dimensions of approximately 145.5 x 69.5 x 7.35mm. The design of the P10 is similar to its predecessor, but does feature some slight changes. The corners have been rounded and the antenna lines now run horizontally along the top and bottom edges of the device. The largest change is the addition of a physical home button on the front of the device, which will also house the fingerprint scanner. Previously, the P9 utilized a fingerprint scanner on the rear of the device.

Other reports have indicated that the P10 will come in standard and “Plus” editions, with the P10 Plus sporting a 5.5-inch display. Both devices are expected to have a minimum of 4GB of RAM and 64GB of storage, with an additional 6GB/128GB option available. Other specifications include a Kirin 960 processor, 12-megapixel Leica rear camera, 8-megapixel front-facing camera, iris scanner and Harman/Kardon audio.