Everything we know about the OnePlus 6T: Waterdrop notch, In-display Fingerprint Scanner, and more

The OnePlus 6T is coming soon – it goes on sale in November, in fact – arriving only a few months after the OnePlus 6. By now, users will be used to OnePlus’ twice-a-year release schedule, once around summer time and once in the fall. The “T” variant of OnePlus devices
don’t tend to make too many drastic changes (going from the OnePlus 3 to the OnePlus 3T was basically a battery life improvement, for example), but that’s set to change. Here’s everything we know about the OnePlus 6T so far.

The OnePlus 6T will feature a waterdrop notch

When the OPPO R17 came out, many speculated that it would be, more or less, the chassis for the OnePlus 6T. They weren’t wrong, as the OPPO R17 features a waterdrop notch on the front which looks exactly the same as leaked renders we’ve already seen of OnePlus’ upcoming flagship. The back looks pretty much the exact same as its predecessor. The OnePlus 6T borrows a lot of cues from the OPPO R17, and not just the design.
The OnePlus 6T will feature an in-display fingerprint scanner
This is one of the coolest features that the company’s latest flagship offering will have – an in-display fingerprint scanner. Few OEMs have actually implemented one, with companies such as OPPO doing so in the aforementioned OPPO R17. OnePlus allegedly considered its inclusion way back even with the OnePlus 5T, however, they decided against it as the technology hadn’t matured yet. We know that they intend to use an optical fingerprint sensor rather than an ultrasound one, where an optical one is theoretically slower. Even still, the company’s commitment to speed should mean that there isn’t a large compromise in unlock time.

The best is yet to come! Wait for the #OnePlus6T to make its debut on October 30th.Get $20 OnePlus voucher (€ /£ /1000 ₹) on Accessories when you buy OnePlus 6T on OnePLUSOnePlus referral link : https://oneplus.com/invite#IHYG2N7JSLJV47DBuy a OnePlus 6T smartphone and get $20 off accessories

The OnePlus 6T will not have a headphone jack

That’s right, the OnePlus 6T won’t feature a headphone jack, something we’ve known for quite a while. The company has stated that over 50% of their users actively use wireless earphones or headphones. As a result, they don’t deem its inclusion necessary anymore. According to Carl Pei, removing it also meant that there could be “substantial” battery improvements. At the same time as announcing that the OnePlus 6T will not have a headphone jack, the company also announced that they were launching the OnePlus Type-C Bullets as a replacement for those purchasing the newer device without a headphone jack.

The OnePlus 6T will feature a 3,700 mAh battery

When Carl Pei said that their latest flagship would have a “substantial” battery life improvement, it was met with skepticism. The OnePlus 6T will admittedly feature a 10% larger battery over its predecessor, which should go nicely with the efficient Qualcomm Snapdragon 845 system-on-chip that will also be included. The OnePlus 6 already has excellent battery life, so a 10% battery bump up should make it even better.

OnePlus is expanding further into Europe, and likely into the U.S.

OnePlus is expanding in a number of different ways, primarily by placing a larger focus on Europe than usual. With an office to be opened in the Netherlands alongside a retail store in France and even more official sellers in the UK, the company is making a bigger push than ever to sell their phones around the world. That’s not all though, as the company is also rumored to be partnering with T-Mobile in the U.S. to officially sell their devices.

Rumored specifications of the OnePlus 6T 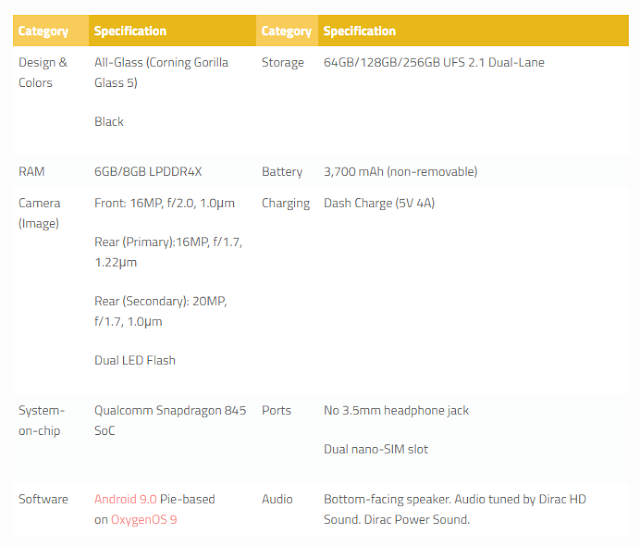