OnePlus 3 vs Nexus 6P: Which is best? 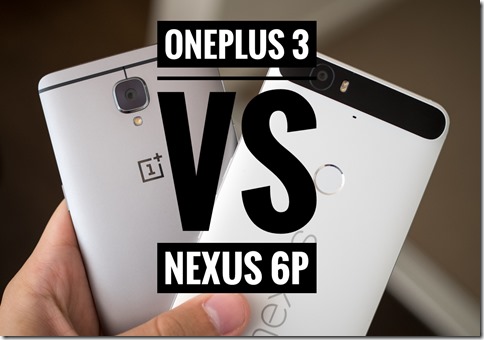 OnePlus 3 vs Nexus 6P: Who wins in the Android battle between the OnePlus “flagship killer” and the Google’s formidable Huawei Nexus 6P?
The OnePlus 3 has finally arrived, and it’s a zinger. This is certain to be one of the biggest contenders of the year for smartphone king, which puts it in direct competition with…
The Nexus 6P. Google’s late-2015 effort is an admirable one, and even scored a mega 10/10 in our review. It’s got serious credentials on and off paper, and won’t disappoint buyers.
But the OnePlus 3 is shiny, new, and packing some formidable up-to-date hardware heat. Can Google’s slightly ailing – but tremendously powerful – Nexus 6P take on the efforts of a small Chinese start-up? Read on to find out.

OnePlus phones have always looked nice, but the OnePlus 3 is the most attractive yet. The front is basically the same as the OnePlus 2, which is no bad thing – it’s shiny, black, and very inoffensive. There’s a fingerprint scanner in round housing, and a front-facing camera on the upper part of the bezel.
The back, however, now looks much more like a HTC One M9. It’s a more premium approach than we’ve seen from OnePlus, and fits with the company’s movement from lowly start-up to a serious hopeful in the industry. It’s also fairly svelte at just 7.4mm

The Nexus 6P is marginally slimmer at 7.3mm, but bigger overall. At 178g, it’s also a fair whack heavier than the 158g OnePlus 3. That’s thanks to its premium build – the Nexus 6P boasts a metallic chassis that’s hard to knock, literally and figuratively. The Nexus 6P isn’t like previous Nexus phones in terms of design, and that’s because it’s the first of the line to be manufactured by Huawei. Great effort, Huawei.
The OnePlus 3 is only available in Graphite right now, but there’s a Soft Gold edition coming in the latter half of July. You can also purchase protective cases from OnePlus in the following styles: Bamboo, Karbon, Black Apricot, Rosewood, and Sandstone. These cases will set you back an extra £20 each.
Meanwhile, the Nexus 6P is available in more colours straight out of the box. You can choose from: Aluminium, Graphite, Frost, and Matte Gold. Google also sells a number of cases for the phone, but other than the Folio, they’re all a bit hideous. Worse still, they range from £15 to a ludicrous £40. Ugh.

So which phone looks better? It’s tough to say, as they’re both premium, metallic, and hefty. Honestly, if you’re choosing between these phones, it won’t be based on the design.

Google, however, opted for a 5.7-inch QHD panel for the Nexus 6P. That means the screen is huge, and gloriously high-resolution (518 pixels per inch). While it’s true that you might not notice the increased pixel count from a foot away, if you’re using the Nexus 6P in a VR headset, you’ll definitely be glad for the higher resolution. However, bear in mind that dense displays draw more power, so the OnePlus 3’s Full HD screen will be very battery-friendly. It’s also worth noting that some users might find the Nexus 6P’s sheer size egregious – 5.7-inch is enormous, even by today’s standards.
The final point to raise is the type of display. The OnePlus 3 uses an Optic AMOLED screen, while the Nexus 6P uses a Super AMOLED panel. First off, they’re both OLED, which is great. Unlike with conventional LCD screens, the individual pixels in an OLED panel produce their own light. This means you don’t need a backlight, because specific pixels can be turned on or off. That makes for both improved power efficiency and truer blacks.

So what’s the difference between Super AMOLED and Optic AMOLED? Not very much, actually. They’re both basically the same display, and they’re both built by Samsung. However, OnePlus has made software modifications to the bog standard Super AMOLED screen, adjusting the colour temperature and contrast of the display, specifically with the goal of improving viewability outdoors.
We’ll have to wait for a full OnePlus 3 review to made a proper comparison, but if its screen looks anything like the Nexus 6P or Samsung Galaxy S7 – both AMOLED – then we’ll be very impressed.

The OnePlus 3 uses Qualcomm’s newer Snapdragon 820 processor, which is a significant upgrade on the Snapdragon 810. It’s between 26% and 54% faster, according to our benchmark tests. It’s also more power efficient, and has a better modem. The Snapdragon 820 uses the X12 modem, which offers theoretical download speeds of 600Mbps. That’s compared to the X10 modem in the Snapdragon 810, which provides a lower theoretical cap of 450Mbps downlink.
But man cannot live on processors alone. Storage and memory also play an important part of the smartphone experience.
The Nexus 6P comes in three storage variants: 32GB, 64GB, and 128GB. That’s a good range of choice, and should suit most users. The OnePlus 3 only comes as a 64GB model (in the UK, at least), but at £309, that’s a right old steal and is more than enough storage. Neither phone offers a microSD slot, which might offend ardent fans of expandable memory – most won’t care.
Memory is the bigger differentiator here. The Nexus 6P features 3GB of RAM, which is a respectable amount of memory for a modern smartphone. The OnePlus 3, meanwhile, touts 6GB of RAM, which is frankly ludicrous. You almost certainly won’t use that much memory. But on the bright side, you could see it as future-proofing. After all, apps are becoming increasingly demanding in terms of memory usage.

Finally, let’s talk about features. Both phones rock a fingerprint scanner, naturally. There’s really no excuse not to these days, especially as Android now supports biometric sensors as standard. But the OnePlus 3 has an extra perk: a hardware button that lets you quickly mute the phone. Seriously, other phone makers should copy this. Please.
Overall, the OnePlus 3 is simply superior in terms of performance. That’s a given. The processor cores are faster, the memory is more expansive, and the GPU is more powerful. Sorry, Google.

OnePlus 3: Android 6.0.1 – skinned with custom-built Oxygen OS
Nexus 6P: Android 6.0.1
This one’s easy: the OnePlus 3 and Nexus 6P basically run on the same software. They’re both using Google’s Android 6.0.1 as the core system, although OnePlus overlays this with its own Oxygen OS software.
That means the OnePlus 3 isn’t the pure version of Android that Google intended, but unlike other manufacturers, OnePlus keeps the changes to a minimum. There really aren’t many differences to speak of; a few tweaks to menus and options, a different colour theme, and an extra quick-access panel, for instance. You can live with, or without them, and they’re unlikely to significantly influence your purchasing decision.

But the real problem lies in the fact that Google’s Nexus devices always get software updates first. When a new version of Android is released, it hits the latest Nexus phones and tablet before third-party devices. This means that when Google’s new Android N software launches, the OnePlus 3 probably won’t get it for a while – but the Nexus certainly will.

The OnePlus 3, meanwhile, has a 16-megapixel sensor. As the Galaxy S7 proves, a higher megapixel count doesn’t equal better photographs, just bigger photographs. Still, you can cram plenty of detail into a 16-megapixel shot, and that’s boosted by decent 1.12um pixels and an f/2.0 aperture.
The big advantage that the OnePlus 3 has over the Nexus 6P is OIS (Optical Image Stabilisation). This is a physical system within the camera module that moves when you take a photo, adjusting for motion. This reduces blur, and is fast becoming a must-have feature on flagship smartphones. The Nexus 6P has digital stabilisation, but it’s simply not as good.
We haven’t fully tested the OnePlus 3 camera yet, so we can’t say which phone is better for snapping overall. We’d expect impressive shots from both; after all, flagship phone cameras aren’t really bad these days, they’re just varying degrees of good.

OnePlus 3: 3,000mAh battery | Non-removable
Nexus 6P: 3,450mAh battery | Up to 440 hours standby, 23 hours talk-time, 100 hours music playback | Non-removable
The OnePlus 3 uses a 3,000mAh battery, which is slightly smaller than the OnePlus 2 (3,300mAh) and much smaller than the Nexus 6P (3,450mAh). That’s not to say any of the phones will be better or worse than each other in battery life, because the depends on a number of factors, not just the size of the cell.
After all, the Nexus 6P’s battery has to power a higher display resolution and is therefore less power efficient – and the OnePlus 3 uses a newer, less juice-hungry processor. Unfortunately, until we’ve finished the OnePlus 3 review, we’ll be unable to fairly compare either phone’s battery life.

Both phones also support fast-charging, but not quite in the same way. Curiously, neither support the widely popular Qualcomm Quick Charge 2.0 (or 1.0 or 3.0, for that matter). That’s slightly ironic as both phones run on Qualcomm chips, but hey, phone makers be crazy, yo.
The OnePlus 3 sports a feature called Dash Charge, which gives you 63% of charge in just 30 minutes. Not bad. It’s based on technology called VOOC that was built by Chinese tech giant Oppo, but it’s modified slightly. This means it’s proprietary, so you can only use it with the OnePlus Dash Charge chargers and cables. If you try using a different charger, it’ll revert to normal juicing speeds.
The Nexus 6P, meanwhile, uses the new USB-C connection (also available on the OnePlus 3) to charge at an increased rate of 15W – that’s 5V x 3A. That means you’re getting some of the same charging characteristics of Qualcomm’s Quick Charge, without actually using Qualcomm technology.
That’s why Google can claim that you’ll get up to seven hours of use from a 10-minute charge.

Here’s where the OnePlus 3 has a clear advantage. OnePlus has always been ahead of the game when it comes to pricing, and that’s because the company sells it phones at around the cost of manufacturing. Google doesn’t, which explains this:
Buy Now: OnePlus 3 at OnePlus for £309
That’s a massive £120 price difference, which is a major point in favour of the OnePlus 3. In fact, pricing is probably the most important factor to take into account with the OnePlus 3, because it’s far cheaper than pretty much any other major high-end phone on the market today.

The OnePlus 3 is in line with the Nexus 6P in many ways. Battery life probably won’t be too different. The designs are similar. Both phones run clean (or almost clean) versions of Android.
But the OnePlus 3 has several advantages. One is the fact that it runs on a newer Snapdragon 820, which brings significant performance improvements. It’s also got the nifty muting hardware button. And despite its lower-resolution display, still offers respectable visuals.
The biggest seller for the OnePlus 3 is its price, however. And that’s why we find it very difficult to recommend the Nexus 6P over the OnePlus 3, because you’re arguably getting a better phone for £120 cheaper.
The Nexus 6P isn’t without advantages, mind. Its QHD screen is superior for virtual reality, and it will always come first for new Android releases, which may be enough to woo hardcore fans of the Google OS.
But for casual users who just want a ruddy good phone, you’re probably better off picking up the newer, cheaper, and more powerful OnePlus 3.
Share186Tweet117Share47

The OnePlus 3 is getting Android Nougat 'soon'